FLxER is an audio visual creative collective since 1999.

FLxER AV Mixer is also one of the first software able to let you play live visuals show (Download).

FLxER produces AV Performances, Video Mappings, Interactive Installations, Workshops, Lectures, Kids Laboratories and some of the most important AV events in the world.

The collective in 2001, using the audiovisual as a raw material and the www, by definition, the platform for the development and sharing medium, driven by the need to know and make known, sharing passions, ideas, actions, collaborating in the creation of a software suitable for the purpose, they themselves develop the tool that gives life and shape to their productions and share it with ALL.
Particular attention in the development of the software is given to the ability to make available the tools for the creation of a narrative and able to make the idea of a “truly live” video performance tangible.

FLxER AV Mixer was born in 2001 as a practical answer to the necessity of mixing the expressive arts of a digital creatives’ collective.

FLxER AV Mixer is a free software for mixing vector graphics, audio, video, text and interactive media all together.

FLxER become also the biggest AV community of more than 30.000 people sharing their own productions. FLxER community moved to AVnode.net in 2019.

Due it was conceived in the spirit of “Arts for Arts Sake”, FLxER AV Mixer has been diffused in the net with no commercial intent as a free software in the optic of “trespassing” and in the spirit of sharing and collaboration proper of a community.

Though, the rapid development of the artistic needs required essential adjustments; opportunities for dialogue and confrontation multiplied: website, seminars and workshops became synergic spaces, creative forgeries for updating and developing the software.

From virtuality to reality, from monitors to television, from clubs to theatres, in few years time FLxER has been gaining an international and itinerant character, becoming the incontestable protagonist of VIDEO, LIVE and PERFORMANCE events.

In the year 2000, Gianluca Del Gobbo – founder of Flyer Agency and already promoter of experimental projects such as Vernice and Shockart.net – was observing the very first experimentations of Alberto Bordonaro (a.k.a. vj b_muvis) at Bluecheese in Rome (Centro di Produzione e Diffusione di Culture Contemporanee), and he noticed a great potential in utilizing a computer as a source for b_muvis to perform his own productions. However this was impossible to obtain due to the absence of a proper software that would allow a rapid selection of the files to send in video.

From this necessity derives the idea of designing an application able to use a computer for real-time video performance as it was already happening in electronic music live events.

This intuition and the challenging invitation to curate the web_art section at the Valencia Biennial 2001 received by Shockart.net (experimental project of Flyer ’s LAB) from Achille Bonito Oliva and Peter Greenaway, gave birth in the same year to FLxER AV Mixer which is developed with a software coming from the net: Flash.

The enormous success obtained by 1.0 version transformed FLxER AV Mixer into an experimental project of Flyer ’s LAB, giving the possibility to make the most of all the technical and technological resources for software development.

On 29th May 2001, FLxER has its own website where, other than using the mixer video straight from the browser interface, it is possible to download the application for using it during live shows.

In 2002, the Bluecheese Factory Klan’s was joined by: Nikky (working to the visual disorders of deliriouniversale.com), Verbo (writer and graphic designer) and Cool79 (writer and designer) that gave birth to a development team; Gianluca, thanks to their contribution and thanks to the support from Flyer , started working on the 2.0 version.

The FLxER started to travel all around the world to present the software or to play visual shows and interactive installations.

FLxER AV Mixer achieves incredible results, praised by Macromedia itself during FlashForward 2002 in San Francisco, where Shockart and FLxER played a central role.

In April 2003 a new FLxER website was published and new tools were made available to users, such as the possibility to create a personal video library, and this immediately means a Community with file sharing hosting years before YouTube and Facebook.

Since 2001 FLxER has been invited to numerous events, festivals, conferences, concerts, shows, workshops and interviews all around the world.

In 2004 FLxER create LPM Live Performers Meeting, the meeting in one place for 4 days of the people in connection trough the FLxER community. From 2004 to today (2019) LPM hosted 3.501 Artists from 72 countries with editions all around the world is today the biggest AV event.

In 2008 LPM starts to be supported from various local Grant for culture.

In 2009 from the community of FLxER VJ Television was born the first 24-hour live video broadcast channel.

In 2011 FLxER started to work to AVnode network as step forward for the FLxER community, with the aim to put in connection and share experiences and tools between organizations active in the Audio Visual Performing Arts. At the same time AVnode will be for the artists the biggest AV community inherit the 25.000 artists of the FLxER community.

In 2011, 2012 and 2013 LPM is supported from the Culture Programme of the EU with the strand for Third Countries making 6 editions 3 in Europe and 3 in Belarus, Mexico and South Africa with hundreds of satellite events.

In 2014 FLxER founded the Live Cinema Festival a live performing exhibition that explores and promotes all the artistic trends whom is attributed the term “Live Cinema”, with performances by artists which have made this narrative technique their stylistic code.

In 2016 FLxER founded the Chromosphere an event on 360 projections inside domes.

In 2017 FLxER founded the Fotonica Festival from photon, historically as light, from Greek φωτός (photòs), is a festival that investigates art forms related to the light element, in particular digital light. 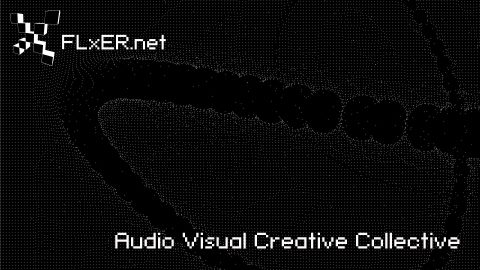